The Union of Bulgarian Artists is a non-profit creativity association bringing together, through its territorial network, visual artists and art critics from all over the country. Founded in 1944, the Union is in fact the result of a half-century of historical experience of Bulgarian artists in the building of an organization capable of protecting their rights and constructing the necessary cultural infrastructure warranting adequate art life.

The Liberation from Ottoman rule was a turning point in the development of fine arts in Bulgarian lands. In the wake of that, the arts left the interior spaces of the churches and set off on a secular road of their own. In the newly established state, which reappeared on the European maps, the first secular exhibitions were arranged, while one of the first government acts in this cultural field was the general art exhibition organized within the First Bulgarian Industrial-Agricultural Show in Plovdiv, featuring works by Antony Pyotrovsky, Emil Holarec, Ivan (Jan) Mrkvička, Petko Klisurov, Antoine Barbiet, Ivan Dimitrov, Nikola Popov, Nikolay Pavlovich, Anton Mitov, Ivan Angelov, Dimitar Bagrilov, Constantin Velichkov and Rayna Kerimetchieva.

Although the exhibition did not receive any notable press coverage and the audiences did not quite understand what it was all about, the exhibition triggered off a number of positive processes. Tzar Ferdinand bought out some pictures from the exhibition and donated these to the State of Bulgaria, thus putting in place the foundations of the Art Department at the Peopleʼs Museum, which was founded, in turn, earlier that same year. It was this general art exhibition, first of its kind, which prompted the founding of the first professional association of artists, in 1893: the Society for the Support of Art in Bulgaria.

Society for the Support of Art in Bulgaria

Work on the Constitution of the Society for Support of Art in Bulgaria began in late 1892, and the final version of the text was adopted on June 24, 1893. Under Article 1 of the document, the goal of the organization would be to “further the development of artistic taste and to support art and industrial artisanship in Bulgaria”. In its efforts to implement this most important task, the Society began organizing general art exhibitions, and the first of these took place in 1894.

Participated M. Petrov (Tchomakov), Josef Oberbauer, G. Kanela, Ivan Mrkvička. C. Todorov, A. Mitov, I. Angelov, A. Barbiet, Ivan Dimitrov, T. Aydukevich, C. Drog, Dobrovic, N. Amzel. Several more forums like this one would be organized by the end of the century, featuring also works by princess Marie Louise of Bourbon-Parma. The Society also initiated the first art magazine in Bulgaria, Izkustvo (Art), and its first issue became a fact in July, 1895. The efforts of the members of the Society, most prominent among these being Prof. Ivan Shishmanov, Constantine Velichkov, Ivan (Jan) Mrkvička, Anton Mitov, Boris Schatz, Petko Klisurov etc., in 1896, resulted in the founding of the State Drawing School – the predecessor of todayʼs National Academy of Art. The Society initiated the first large-scale international presentations of Bulgaria art abroad, in a number of European countries.

In the beginning of the 20th century, the Society was reformed and renamed to Association of Artists in Bulgaria, yet until the end of its existence, in 1944, it continued to defend the academic expressive language as its stylistic creed. This fact provided the cause for systemic tensions among art circles and provoked a number of artists awed by the actual art processes in Europe in the beginning of the 20th century, to establish the Contemporary Art Society (1903).

The Contemporary Art Society was begat as an attempt to compensate the widespread lack of curiosity towards the new phenomena in art and the experiments in the decorative/applied arts. The basis of the initiative were the views embraced by critic Andrey Protic, artists Charalampy Tachev, Dimitar P. Daskalov, Stefan Ivanov, Nikola Michaylov, Peter Kantchev, architects Peter Koytchev, Georgy Fingov, Kiro Marichkov etc. It all began on September 29, 1903.

As early as the winter of that same year they arranged their first joint show. Over the years, the Society gathered momentum and its ranks were joined by figures like Yaroslav Veshin, Stefan Badzhov, Marin Vassilev, Alexander Bozhinov and numerous others. Up to 1919, the Society was a synonym of renewal, and its work was associated with the first major reform in the State Drawing School in 1909, when it was renamed to State Art and Industrial School.

In the 1920ʼs and 1930ʼs, the Society lost its leading role in promoting new artistic quests, yet it continued to take part in the general art exhibitions then regularly organized in Bulgaria and play a prominent role there. Meanwhile, numerous other art societies came into being. Notable among these was the Association of South Bulgarian Artists.

In 1910, schoolteachers from Plovdiv marked the Easter holidays with an exhibition which attracted numerous admirers. This provoked Simeon Velkov, Gocho Savov and Atanas Ovcharov to produce another exhibition, at the same time next year. Some 80 paintings were displayed and a large number of these were bought out by the National Library and private connoisseurs. Then, in one of the classrooms of the “Stefan Stambolov” primary school, on Statsionna street (now “Ivan Vazov” street) where the exhibition took place, the idea was born to invite artists from the entire south Bulgaria for the exhibition on the following year. 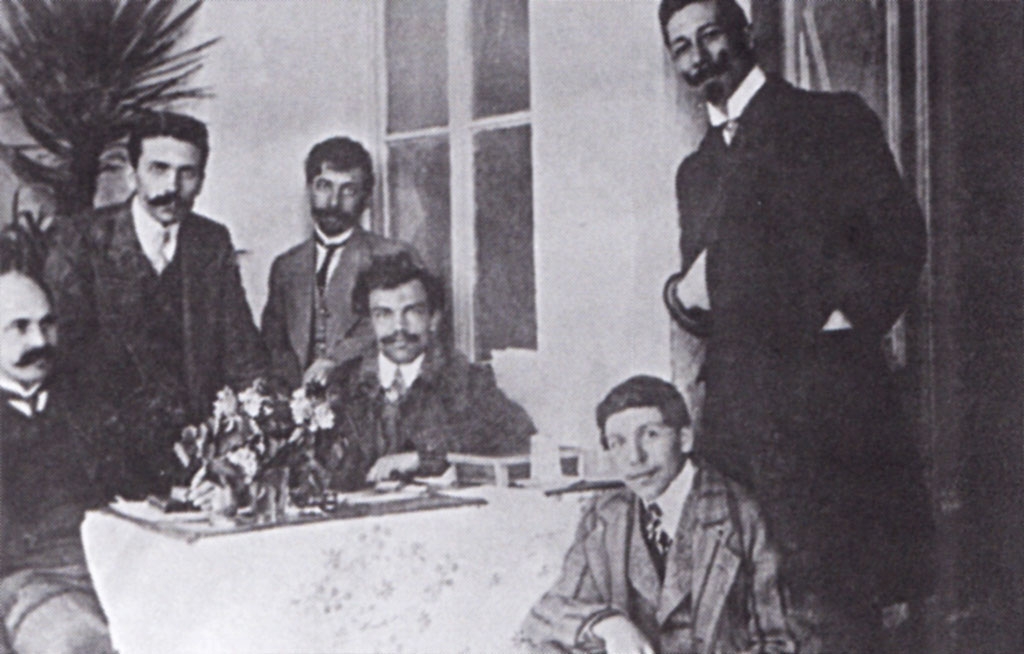 11 artists responded sending their works: paintings, sculptures and applied art. Inspired by their success, on the following day, the participants in the show and other artists, decided to establish an Association of the South Bulgarian Artists. The constituent assembly was chaired by Christo Stanchev, and Atanas Baklarov read out the draft-constitution of the Association. On June 20 that same year, the constitution was approved by Order No 2269 of the Minister of Peopleʼs Education. Also legalized was the official stamp featuring an image of a Thracian horseman and the inscription: “Association of South Bulgarian Artists”. The activities of the Association were seriously crippled by the wars: the First And Second Balkan wars, the First World War, yet it continued to organize exhibitions and was soon established as one of the leading art associations outside Sofia, bringing together diverse artists not based on their aesthetic and artistic views, but rather on a territorial principle. The Association lasted until 1948, when it was formally discontinued.

In a similar fashion, in 1920, the Association of North Bulgarian Artists came into existence. Before that, however, the Native Art Society was established to become a leading art association up until 1944.

The Native Art Society could be thought of as a sort of opposition to the tensions between the different art societies existing in Bulgaria in the late 1920’s. Among its founders were members of the Association of the Artists in Bulgaria, the Contemporary Art Society, the the Association of South Bulgarian Artists, where members of the latter, despite their participation in the Native Art Society, continued to present their works at the annual exhibitions of the Association of South Bulgarian Artists. The Constitution of the Native Art Society was drafted by Asen Belkovsky, Alexander Bozhinov, Mikola Ganushev, Boris Denev, Stefan Ivanov, Ivan Lazarov, Elena Karamichaylova, Elisaveta Konsulova-Vazova, Nikola Marinov, Alexander Mutafov, Nikola Tanev,  Tseno Todorov and Constantin Shtarkelov, among others.

According the the text of the Constitution, the main goals of the Society were to place native art on firm ground, try to bring national characteristics to local art, monitor and evaluate each artistic endeavor, whatever its source. Despite this quite general platform, the Society brought together authors whose work was exemplary of artistic quality. Some of the most prominent Bulgarian artists of the early 20th century joined in, and today their work is representative of the most essential periods of  the history of Bulgarian art, and illustrates the Europeanization and modernization of Bulgarian art.

A year after that, the Association of the Independent Artists was established as a counterpoint to the rigid requirements for aesthetic quality of the 1920ʼs.

Association of the Independent Artists

Over the years, among the members of the Association, one comes across authors like Vaska Emanuilova, Olga Bradistilova, Alexander Dobrinov, Ruska Marinova, Lyuba Palikarova, Nevena Gancheva, Karl Jordanov, Stoyan Venev, Vera Lukova. The Association followed the concept of the French Société des Artistes Indépendants where members were Seurat, Signac, Cezanne, who refused to be associated with any of the existing art schools. It was in this spirit, the quest for free expression of creative individuals that the Association of Independent Artists was established. Despite the presence of prominent names among the members of the Association, it did not play any defining role in Bulgarian art life, until its closing down in 1944. The fate of the Association of North Bulgarian Artists, established in 1920, was similar.